Sometimes It Takes a Zombie

One of the most meaningful developments in recent popular culture is the rise of the zombie. Zombies are now everywhere, from TV series to Hollywood movies and video games. While the zombie genre is clearly not for everyone given its level of gory violence, its social and political message concerns all of us.

Zombies are neither dead nor alive. They are mindless, speechless corpses driven by one need: eating other people.

The pioneer of the zombie film as social commentary is American-Canadian director George A. Romero. Out of his six zombie films, the best is arguably the second one, Dawn of the Dead, released in 1978.

In this brilliant piece of commentary on modern society, the action takes place in a shopping mall. The zombies roam the parking lot, then try to enter the mall as if there was some new product they just had to have before everyone else. They eventually roam the mall, the very image of the mindless consumer. 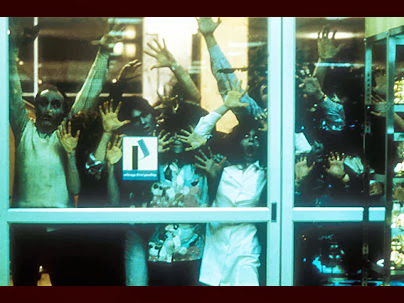 For good measure, here is one of the countless pictures of what happens for the biggest sale of the year at the mall: Zombie stories are also meaningful in terms of the survivors’ behavior. For the survivors are not always more human than the zombies they try to escape. In Romero’s Diary of the Dead (2007), for instance, one of the survivors chooses to film other people being attacked by zombies rather than help them, so that he can share his video online. He does not survive for long, of course, and becomes what he truly was all along, a zombie.

The zombie’s message is simple, often even simplistic, and it is not conveyed subtly. However, it has become so easy to tune out and forget what really matters that, sometimes, it takes a zombie to remind us.