A Marathon Worth Running

In 490BC, Greece is under attack. The Persian Emperor Darius has sent hundreds of warships in order to punish the Greek cities that rebel against his rule and to conquer the few that remain free, especially Athens, which has just become a democracy. After taking control of the sea, the Persian soldiers land for battle on the Greek coast, on the beach of a small town that still exists today. The town’s name? Marathon.

General Miltiades decides to send all Athenian soldiers to Marathon in order to prevent an invasion. When the 10,000 Athenians arrive along with 1,000 allies, they face a Persian force of about 30,000 soldiers, not to mention tens of thousands of sailors and servants. Athens needs help.

One Athenian messenger is sent on the first of three races against time associated with the Battle of Marathon.

Pheidippides runs about 225 km / 140 miles to Sparta in a day and a half to ask for help, but the Spartans are celebrating an important religious festival, the Carnea, which means no fighting for ten days. The Athenians are alone.

The battle begins. The Persians are strong in the center, but Miltiades has anticipated weakness on the Persian left and right, which he uses successfully. The Persians are defeated and run back to their ships. The problem is, they set sail for a landing spot near Athens itself, where there are no soldiers left. The Athenian soldiers have won a great victory, but Athens must be warned.

Now comes the second famous run, which is only a legend. An Athenian — some say the same Pheidippides, others a different messenger — is sent running from Marathon to Athens to report the victory and tell everyone not to surrender the city. The distance is about 40 km / 25 miles. He runs so fast that he dies just after delivering his message: “We are victorious!”

This story is the inspiration for the long-distance race at the first Olympic Games of modern times, in 1896, and has given the race its name, the marathon, as well as its distance of about 42 km / 26 miles, as measured from the modern town of Marathon rather than the site of the battle on the beach. 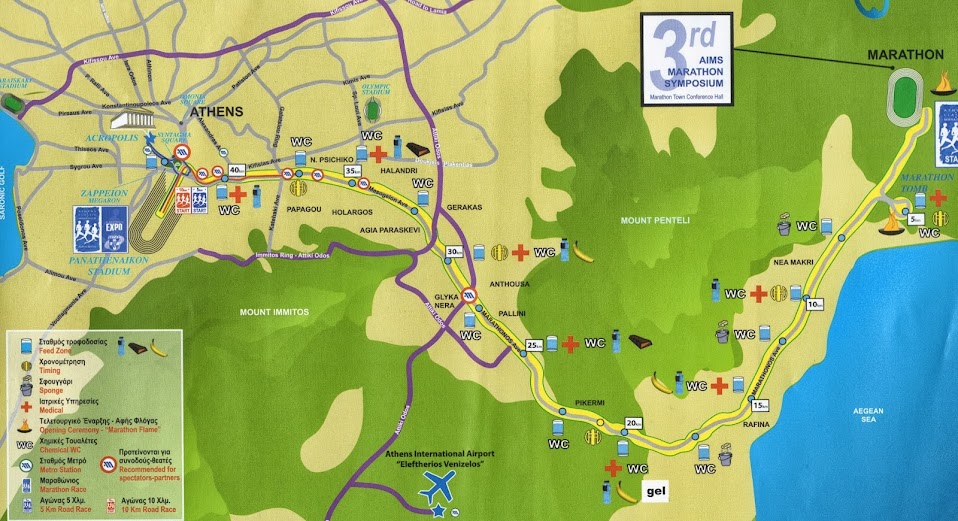 Map of modern marathon from marathongreece.com, with plenty of toilet stops the soldier probably did not make

Now comes the third and most important race of the Battle of Marathon.

Remember that the Athenian army must get to the coast near Athens before the Persian ships. They have to cover over 40 km / 25 miles on foot, and they have already fought an exhausting battle. One soldier making it in time would have been a feat, but the entire army actually makes it, minus the few who stayed in Marathon. When the Persian ships arrive, the Athenian soldiers are ready for battle, facing the sea. The Persians do not even try to land. Their ships turn away.

This is the first time the Persian army has been defeated by Greeks. Other battles will follow, but the race of the Athenian soldiers from Marathon saves democracy and makes the development of free Athens possible, along with the Golden Age of Greece, during which the foundations of western civilizations are laid.

Now that is a race worth running.