As some have guessed, another significant part of Steinlen’s Le Chat Noir poster is the red halo around the cat’s head, especially the two words written in the halo: “Montjoye Montmartre.” 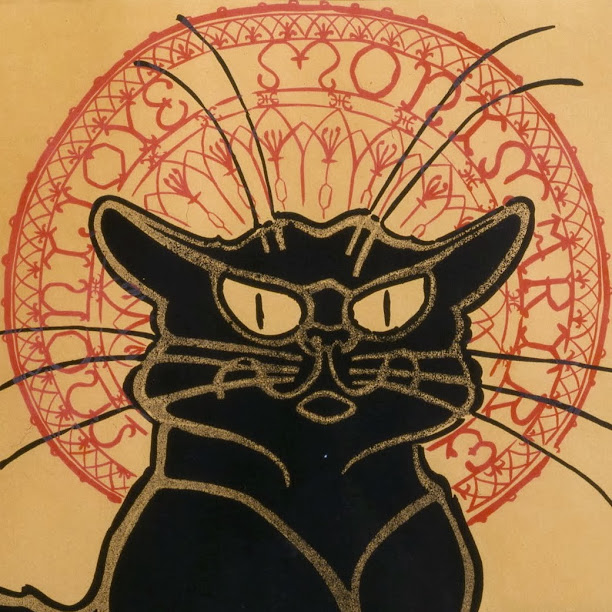 “Montjoye” is the tongue-in-cheek archaic spelling of “Montjoie,” which is what French soldiers would shout when going into battle in the Middle Ages. This battle cry also included the name of the saint associated with the ruler. The soldiers of the King of France would shout “Montjoie Saint-Denis!” For the soldiers of the Dukes of Burgundy, the cry was “Montjoie Saint-Andrieu!” and so on, depending on allegiances.

In this case, the cry is “Montjoye Montmartre,” which subversively states Le Chat Noir’s allegiance to the Bohemian heart of  fin de siècle Paris, the Montmartre area.

The fact that the words are inside a halo adds religious parody to the political subversion and makes the black cat a saint, to be worshipped by all.

This is exactly the kind of spirit that animated everyone associated with Le Chat Noir, especially its founder, Rodolphe Salis.

In his Ten Years of Bohemian Life (1888), Emile Goudeau tells the story of a night when the Chat Noir followers crowned Salis Emperor of Montmartre, in an elaborate ceremony which involved Salis on stage wearing golden robes and holding a huge scepter.

Goudeau also reports that at the entrance of the cabaret there was a doorman dressed as a Swiss Guard with golden uniform and weapon, whose job was to let artists in and keep soldiers and other followers of orders out. The Swiss Guard was and still is a serious affair in Europe, as the Swiss soldiers were hired for protection by kings and other leaders. Swiss Guards can still be seen today, but only in the Vatican, where they are charged with the protection of the Pope:

Swiss Guard swearing-in ceremony, 2013. Don’t be fooled by the funny-looking uniforms. These guys don’t mess around.

As the red halo perfectly illustrates, nothing was too serious and no one too powerful to escape Le Chat Noir’s spirit of subversion.

Who doesn’t love a cat with an attitude?